My Journey with Alpha Gal

I have always been a meat eater. I grew up on a farm and have hunted 45 of my 52 years. I have always had tick bites year after year. I treated my clothes with Permethrin, and Deet on exposed skin when hunting and scouting. Ticks still bit me.

About three years ago I started getting sick late at night or very early the next morning, usually after cooking out. I came across an Alpha Gal document while researching some information on Lyme Disease for my Dad. I disregarded it and kept eating meat. Over time I got more tick bites as I scouted and hunted.

My wife and I moved from the Northwest side of Jacksonville to the Lake Asbury area, still undiagnosed. We bought an organic raised cow and had it butchered. Grilling some steaks one evening I sampled some of the rare edges of this great tasting steak. I barely finished grilling the steaks and started feeling very ill. Later that night I became violently ill. The document I read months ago flashed through my head, but I disregarded it. A couple weeks later I was surfing in St Augustine and had a burger from The Oasis after a fun day in the waves. Later that night I became ill again. The document flashed through my head again but vanished just as quick.  Another episode after scouting and a burger from a favorite local restaurant here in Middleburg and the links started to come together. “No way” I thought!   This disease isn’t in Florida. It must be the local beef here in North Florida. Fast forward to early July of this year and I’m on a fishing trip with Rob and Amanda. We have a decent day of catching and hit a local restaurant for some lunch. I tried the Philly cheese steak and, you guessed it, I got sick. Now I’m pretty sure something is going on. But was it me thinking about it too much?

I made an appointment with my family physician for the test. When I arrived, the Doctor had never heard of this illness. He went and got his laptop and confirmed what I was telling him. He sent me to a specialist who ordered the blood test. She prescribed me four Epi-Pens! What?? She then informed me that I could go into anaphylactic shock from mammalian products and I should avoid them at all costs. No beef, pork, venison or lamb. No by-products such as cheese, milk, ice cream, gelatin and a lot of other everyday foods. I attended the 2018 Fall Rendezvous with nervous anticipation of getting my results back. My appointment was August 7 and the blood test confirmed it. I had contracted Alpha Gal.

I have avoided mammal meat like the plague since then. It has been hard because all I've eaten since a young boy was meat. You guys, it was an awful transition. I truly believe that certain bodies are made to exist on meat. My body has not been the same, my brain chemicals haven't been the same, fighting against such deep depression was not in my arsenal. I didn't have energy to move without pain in my entire body. It has been such a life altering experience. I was an avid outdoorsman and fairly athletic but now my body challenged me to get out of bed. My family altered their gatherings to accommodate me, and I felt guilt constantly because they couldn't enjoy food like they had before. Anyway, my long point is that this is crippling. It may be something that I eventually can get over, but I must live in a bubble of avoidance and for an adventurous outside person like me, it is awful. It can be possibly conquered, but it is meticulous and a careful pathway. 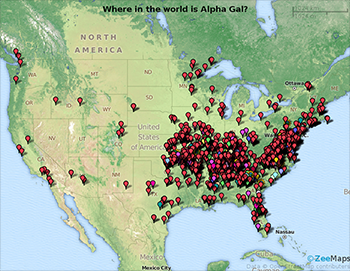 ​Alpha-gal allergy, also known as meat allergy or mammalian meat allergy (MMA), is a reaction to galactose-alpha-1,3-galactose (alpha-gal), whereby the body is overloaded with immunoglobulin E (IgE) antibodies on contact with the carbohydrate.
What are the symptoms of alpha gal?
Alpha-gal allergy can cause: Alpha-Gal Allergy: Symptoms, Treatment, Causes, and More - Healthline
https://www.healthline.com/health/allergies/alpha-gal
What causes alpha gal?
A bite from the Lone Star tick can cause people to develop an allergy to red meat, including beef and pork. This specific allergy is related to a carbohydrate called alpha-gal and is best diagnosed with a blood test.Meat Allergy | Causes, Symptoms & Treatment | ACAAI Public Website
https://acaai.org/allergies/types/food-allergies/types-food-allergy/meat-allergy
How do you know if you have alpha gal?
In alpha-gal syndrome, signs and symptoms typically don't appear for three to six hours after eating red meat. Signs and symptoms of alpha-gal syndrome may include: Hives, itching, or itchy, scaly skin (eczema) Swelling of the lips, face, tongue and throat, or other body parts.Jun 12, 2018Alpha-gal syndrome - Symptoms and causes - Mayo Clinic
https://www.mayoclinic.org/diseases-conditions/alpha-gal-syndrome/.../syc-20428608
How do you test for alpha gal?
DiagnosisJun 12, 2018Alpha-gal syndrome - Diagnosis and treatment - Mayo Clinic
https://www.mayoclinic.org/diseases-conditions/alpha-gal-syndrome/.../drc-20428705